The Lengai volcano is a sacred mountain in the Maasai culture, its name in Maasai means “Mountain of God”.

Described by scientists as a geochemical sanctuary, protected by UNESCO and recently named Geopark Ngorongoro-Lengai. It is a perfect volcanic cone that rises above the Rift Valley to a height of 2,890 m.

The Oldoinyo Lengai is a demanding ascent, because you touch the top in a day. Its steep slope makes it a challenge to raise and lower it.

The Oldoinyo Lengai is the only active volcano on the planet that erupts carbonate lava, which causes the lava to have a temperature lower than normal, approximately 500 ° C.

The best time to climb the mountain is at night when temperatures are lower, which is why we are forced to start the ascent at almost midnight, which also makes it a unique show.

This trekking in Tanzania is unique and allows the possibility of an extension of safari game drive to Serengeti, Crater of Ngorongoro, Tarangire and Lake Manyara. 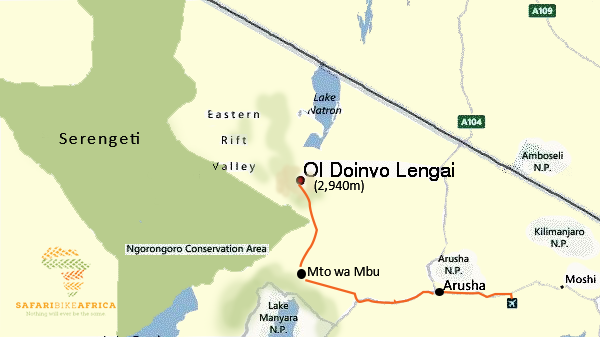 From Arusha to Oldoinyo Lengai

After breakfast at your hotel at 07:00 am we will be waiting for you to be transferred to the vicinity of Natron Lake, in the Maasai Ngaresero village, where we will have lunch in a dream place and we will visit the area contemplating the landscape, wildlife and vegetation until you reach the Natron Waterfalls where we can take a refreshing swim. 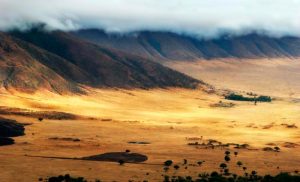 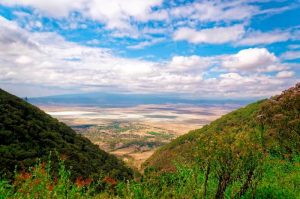 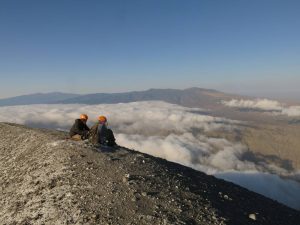 After a few hours of rest, we will get up very early at 1:00 am to head to the base of the Oldoinyo Lengai mountain and start this incredible and hard trekking.

We will reach the summit at sunrise and enjoy the best views of the Rift Valley, Ngorongoro and Lake Natron.

Once we have descended, we will be transferred in our SUV from Safari Bike Africa to Maasai Giraffe Eco Lodge to take a shower and a swim in the pool. After lunch we say goodbye to the sacred Oldoinyo Lengai volcano and we will return back to Arusha.

Below you can find a summary of your challenge to the Ol Doinyo Lengai volcano, as well as the prices per person

The prices do not include:

Do you want to know more about this incredible safari?

Exclusive accommodations for your trip

Discover the dreamlike places that we will visit

Let's go!
Things you should know